Addiction... in a good way - leading to convergence of education, technology and creativity

It all started with my wife, Eleanor, who picked up crochet and knitting... she had high hopes of making a whole bunch of clothes for our kids. She found out that it required a LOT of time, and the repetitive nature was wearing. In addition to that, the notion of designing things in 3 dimensions caused quite a bit of frustration... she turned to me, who loves to build things, and said that I would probably be good at this, as it requires thinking and designing in 3D. No real interest on my part to pick up crochet or knitting.

When I started playing around with the 3D printer, and brought home some things that I created, she mentioned again how it's like crocheting but with melted plastic instead of yarn. Still no real interest in picking up crochet or knitting.

One day, I stumbled across some really cool and cute looking crocheted dolls on the Internet, and the term "amigurumi" (sounds so much cooler than "crochet", but translated from Japanese, it just means "crochet" stuffed toy). I immediately thought of Sack Boy from Little Big Planet and thought, hey, I think I can do that... I need a distraction from the busy-ness of life... so off to YouTube I went, to learn how to crochet.

It's amazing... the world of education has changed.

So I started with a simple ball... well I guess it wasn't so simple, but after mastering the simple chain stitch, figured I needed to craft this in to something that resembles a 3D shape of some sort.

My first attempt ended up being a doll with an oversized head... I used the green yarn that we had an abundance of (thanks to my wife), and at the end realised that it matched the green of the Google Android.

Second attempt... Sack Boy prototype, but with green yarn (what we had an abundance of)

Now that I was starting to get the hang of this, off to Michaels craft store to buy my own yarn... and in the colours I wanted. My first attempt at Sack Boy had a simple head.

I didn't like it all that much, so pulled the head apart (the beauty and danger of crochet is that when you find the end of the yarn, all that's required is a simple pull and it all falls apart... reusable materials: great, having to recreate something: not so great... but additional attempts nonetheless, which really lends itself to the notion of formative learning leading to mastery)

Redesigned the head as such, and I'm a lot happier... so are the kids... they toss him around the house as if he's being played in the video game but in the real world.

And then "the request"... Minions!

Addiction continues - the Joy of Crochet

I've found that the distraction of crochet and the repetitive nature has really allowed me to push back any immediate problems that I am solving with my development work, which allows my subconscious to work on the solution, which my conscious works through the crochet. It has lead to an efficiency and elegance in my crafting of development work, and also my crocheted creations.

Figured that now that I've gotten somewhat addicted to this new craft, I should share my creations online. The initial responses included "What? you knit?", "Can you make this?", "Here's an idea..." , and then challenges that ensued sparked more ideas (so did the wise-cracks)...that didn't matter... take ownership of it and carry on. Started to design farewell gifts for colleagues that were heading back to the classroom. Today we celebrated +Aimee Ford as she heads back to the school this next school year.

The MakerSpace - Convergence of all things Educational

Again, the world of education has changed... evolved... I see and hear about more and more libraries being converted to MakerSpaces, and I can see why. The library has always been a place to seek knowledge, and learn about something that you didn't know about. Sure the etymology of the word "library" does refer to books and the collection of them, but what was in those books? Tapped knowledge waiting to be untapped yet again by the reader... fast forward to the 21st century... the web is the new hoarder of information. The "space" to try things out lends itself to further education...thus the MakerSpace.

Combining 3D printouts, crochet, and some electronics tinkering with a USB5M (a USB recordable sound board), I thought why not make a tribute to a colleague who's going back to the classroom this next school year. +Scott Monahan has been our Google gooru, and an inspiration for me with respect to blogging and starting this blog. Mix this all together, bake it in thought and collaboration with other team mates, and what's the result? PocketScott.

Here are a few process photos in the creation of PocketScott.

We took audio clips from videos of Scott and embedded them in to the sound board, along with some classics from Star Trek and Star Wars. Thankfully, these parting gifts were well accepted.

Needless to say, I'm addicted to this convergence of disciplines, technology and creativity. I hope this inspires you to go out there and learn something new... you never know, it might grow in to an addiction of sorts... in a good way! 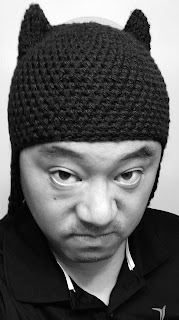